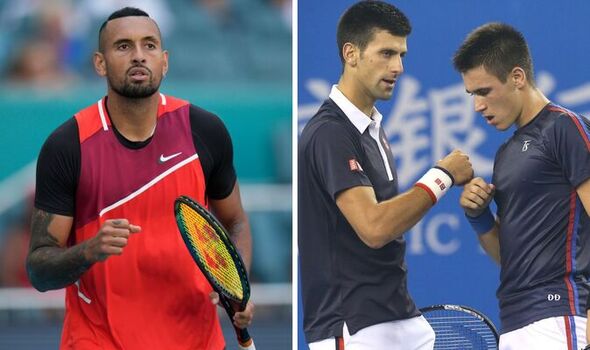 Novak Djokovic’s brother has confirmed that he is in talks with Nick Kyrgios after sharing his wish to bring the Australian to Belgrade in gratitude for his support of the world No 1 amid his visa saga at the start of the year. Djordje Djokovic had previously issued the 26-year-old with a public invitation to the Serbia Open but Kyrgios is not playing the clay swing this year so is “in negotiations” to compete in 2023.

The Serbia Open kicks off next week with Novak Djokoic as the top seed. The ATP 250 event is being held in his own Novak Tennis Centre in his home of Belgrade with his brother Djordje as the tournament director. Ahead of the event, Djordje had publicly invited Kyrgios to compete and said he wanted to “bring [him] to Belgrade” in a thankful gesture.

The current world No 77 was one of few players to publicly defend Djokovic multiple times when he had his visa cancelled twice after arriving Down Under for the Australian Open in January before he was ultimately deported. But Kyrgios was unable to take Djordje up on his offer this year as he is skipping the European clay season, and now the younger Djokovic brother has revealed he is already in talks with the Aussie for next year.

“Belgrade is open to everyone,” the Serbia Open boss said in a recent speech before play kicks off on Monday. “We absolutely invite all tennis players, including Nick Kyrguis, with whom we failed to reach an agreement this year, because he is not a big fan of clay tournaments and he does not hide it.”

Looking ahead to the 2023 edition of the ATP 250 event, the 26-year-old Djokovic brother continued: “We have already entered into negotiations with him for next year and I think it would be great for Nick to introduce himself to the home crowd.”

A few weeks ago, Djordje had shared his wish to bring the recent Australian Open men’s doubles champion to Serbia as he said: “I want to bring Nick Kyrgios to Belgrade, to thank him for supporting Novak, Belgrade and Serbia. He is an entertainer, he doesn’t mince his words and he will always express his opinion, whatever it may be. But above all, he is a serious athlete and tennis player. I hope that he will come to the Serbia Open before he finishes his tennis career.”

It seems the youngest Djokovic brother will get his wish if Kyrgios is to compete next year, and Djordje has also touched on his sibling’s participation in next week’s tournament. “Novak arrives today, if I’m not mistaken, he landed a little while ago,” he said on Saturday, addressing spectators ahead of the event.

The world No 1 will be hoping to benefit from being at home in his own Tennis Centre to get some much-needed wins under his belt after playing just two events so far this year and going 2-2 in wins and losses. His most recent defeat came in his opening match at the Monte Carlo Masters, where he lost to world No 46 Alejandro Davidovich Fokina who will now contest the final against Stefanos Tsitsipas.