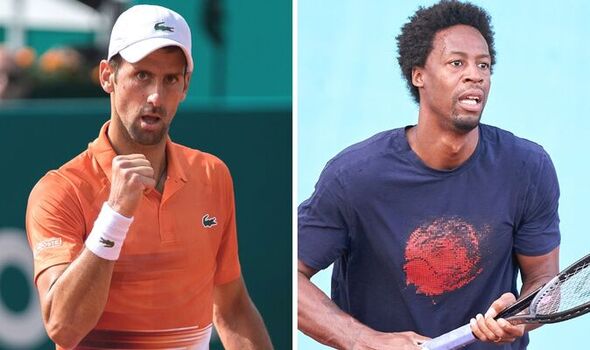 Novak Djokovic’s first opponent at the Madrid Masters has downplayed his chances against the world No 1. Gael Monfils will take on the Serb for the 18th time and has never been able to get a win over Djokovic but has been told he will have a good chance with the top seed still looking to find his top level.

Djokovic opens his Madrid Open campaign against world No 21 Monfils, whom he holds a 17-0 winning record against. The world No 1 has made no secret of the fact that he is still looking to find his best form ahead of his upcoming French Open title defence, having played just three tournaments this season.

While the top seed is not at his usual dominant best, having admitted so after his 6-2 6-7(4) 6-0 Serbia Open finals defeat to Andrey Rublev, the Frenchman doesn’t believe it gives him an edge over the 20-time Grand Slam champion. “It’s going to be obviously a big challenge for me. I’ve never beaten him in the ATP tour,” the 35-year-old told Eurosport.

“I’m getting my rhythm back as well and it’s funny because up there they told me he’s getting his rhythm but obviously he has more matches on clay than me, so he’s a little bit fresher. But I feel like tomorrow I’ll play my luck as hard as I can and try to take as much points, moments, decisions on the court to have the opportunity to beat him, but obviously also to build towards the French. Because when you play the best, that’s where you get the most practice.”

JUST IN: Murray’s main weapon may be used against him in Shapovalov Madrid tie

The former world No 6 also confessed that Djokovic was the “better” player and admitted he didn’t care about his record against the Serb, continuing: “It’s only for people, people they really want [me to beat him]. The guy is better than me. Every match is an opportunity to win it. I try to take some lesson in everything, but I don’t really care.

“He can beat me tomorrow. He can beat me in Rome. He can beat at Roland Garros. Maybe I will get once and that’s it. Who cares at the end?” Meanwhile, Djokovic explained that he had been working on his fitness after dropping the opening set in all of his four matches at the recent Serbia Open, and suffering his first back-to-back defeats since July across the Dubai quarter-final and his first match in Monte Carlo.

“[It was] different in Belgrade than it was in Monaco,” he explained ahead of his Madrid campaign. “Knowing that I played four almost-three-hour matches and long, three-set battles gives me enough reason to believe that it’s headed in the right direction.

“I had a very good week of training now. I put more emphasis on fitness and building the stamina and endurance, because that’s what’s going to be necessary in order to compete with top guys on the slowest and physically most demanding surface in our sport.”