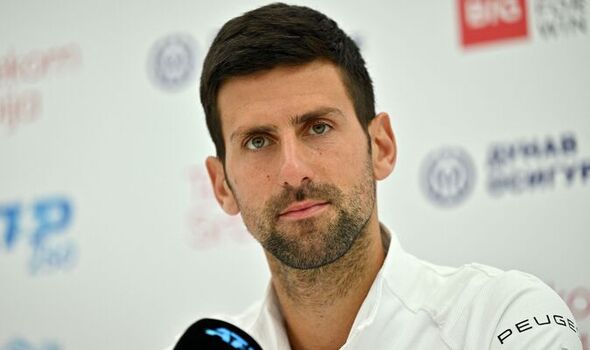 Novak Djokovic’s latest opponent has fired a warning at him as he looks to hand the Serb his second successive opening-round loss. The world No 1 will face compatriot Laslo Djere in his opening match at the Serbia Open on Wednesday in what will be a first meeting between the countrymen, and Djere is looking to repeat Alejandro Davidovich Fokina’s heroics after the Spaniard knocked Djokovic out of last week’s Monte Carlo Masters.

Djokovic is the top seed at this week’s Serbia Open, held in his own Novak Tennis Centre in his home of Belgrade where his brother Djordje is the tournament director. Having received a bye to the second round, the 20-time Grand Slam champion will meet countryman and world No 50 Djere on Wednesday.

The 26-year-old defeated another Serb in wildcard Hamad Medjedovic 6-4 7-5 in the first round on Tuesday, earning the chance to face the world No 1 for the first time in his career, and Djere was feeling positive about his chances. “We know each other very well,” the two-time title winner said.

“To beat him I know I will have to play my best tennis. To use my chances. I am motivated for the match tomorrow, I am looking forward to our first clash.” The former world No 27 shared his confidence ahead of his meeting with Djokovic, relishing playing on his most successful surface after starting the clay-court season with a 5-2 win-loss record.

“The transition from hard to clay is not easy,” Djere admitted. “This is my favourite surface, I had two great weeks. Last and the one before that, the semifinals in Marrakech, a good tournament in Monte Carlo. I started the tournament with a good dose of self-confidence, which was not the case at the beginning of the season.”

While the Serbian No 4 also said it was tough to play his compatriots, he was feeling “positive” about facing the country’s most successful player after defeating 18-year-old countryman Medjedovic. The world No 50 added: “It is sometimes difficult to play with Serbian players, but I have played many times with more or less success. I know how to prepare.

“It will be different with Novak, but I am positive, I do not want to put myself under pressure, I am going point by point.” Meanwhile, Djokovic has set his sights on getting some more matches under his belt after crashing out of the Monte Carlo Masters in his opening round.

The world No 1 has played just two tournaments this year as a result of his unvaccinated status, going 2-2 in wins and losses. “I need match practice and this is the surface (clay) that requires a lot of time spent on the court during training sessions, and even more during matches,” he said ahead of his Serbia Open campaign. “I hope to play more matches in Belgrade than in Monte Carlo.”