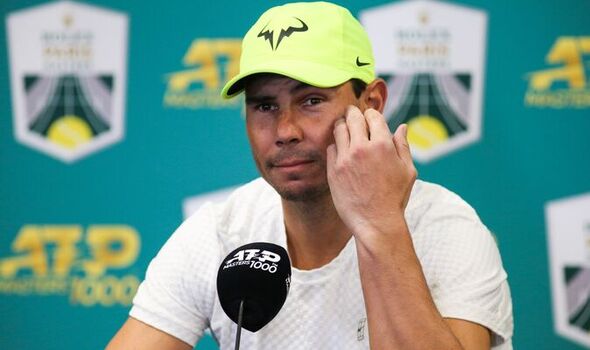 Rafael Nadal has admitted that he is unsure of his form heading into the Paris Masters as he makes his return to competition following almost two months on the sidelines. The world No 2 took a hiatus after his US Open fourth-round loss to recover from an abdominal tear he suffered at Wimbledon and is back in action at the penultimate tournament of the year.

Nadal is making his comeback in Paris-Bercy this week after playing his last professional match on September 5, losing to Frances Tiafoe at the US Open. The world No 2 has played little tennis since tearing his abdomen at Wimbledon, losing his opening match in Cincinnati before his fourth-round defeat in Flushing Meadows, and has now admitted he is unsure of his physical state given his “older body”.

“I don’t know. Let’s see on the competitive level how I manage,” the second seed told reporters at the Paris Masters as he reflected on his current form. “It’s always an issue with older bodies like mine, it’s easier to know how the things are going when you are playing tournaments in a row.”

While the 22-time Grand Slam champion has been practising at his Rafa Nadal Academy in Mallorca, he said it was tough to know where he was at after an extended period away from the game, playing just one match in doubles alongside Roger Federer at the Laver Cup over a month ago.

JUST IN: Raducanu told how to use Djokovic to improve after injury ends season

He continued: “When you are coming back from a period out of the competition, it’s difficult to know how you’re going to be playing, how your body is going to respond, because it’s obvious that the tour level is different than the practice.”

Nadal has had a rollercoaster season, going from the highest highs to the lowest lows as he won two more Grand Slam titles to set a new record in men’s tennis but also revealed he thought he would have to end his career with a foot injury shortly after lifting his 14th French Open crown.

The 36-year-old returned at the start of this year after ending his 2021 season in August and won 20-successive matches, spanning titles in Melbourne, Acapulco and a then-record 21st Major at the Aussie Open. Looking back on his year, Nadal said: “It’s true that 2022 has been an amazing year in terms of results, but at the same time, it is true that have been a tough year in terms of injuries.

“I am here to try my best. Then accept the things how the things are coming, Hopefully, I’ll be ready.”