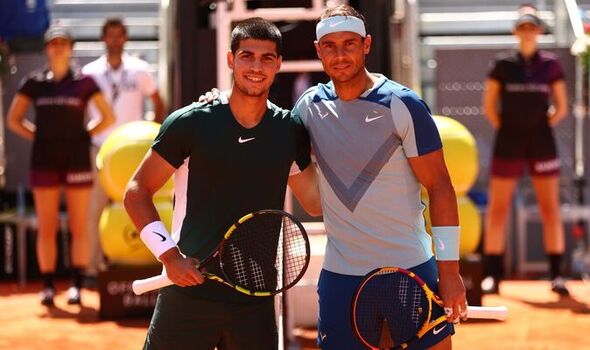 Rafael Nadal and Carlos Alcaraz have announced an exhibition match for next year. The Spaniards will do battle in Las Vegas on March 5 in what is being headlined in true boxing style as “The Slam: Nadal vs. Alcaraz”. The countrymen currently occupy the top two spots in the ATP rankings and have already faced off three times in the past.

Nadal recently concluded a tour of exhibition matches across South America with world No 3 Casper Ruud, and has already added a new showcase with his compatriot, world No 1 Alcaraz. Announced on Tuesday, the pair will do battle at the MGM Grand Garden Arena in Las Vegas in March, ahead of the Masters 1000 events in Indian Wells and Miami.

The pair have already met three times on the tour, with the 36-year-old leading their head-to-head by two wins to one loss. He defeated Alcaraz on what was his 18th birthday at the 2021 Madrid Open and quashed his countryman again in the semi-final of Indian Wells earlier this year before the teenager got revenge in Madrid by beating Nadal a year later, this time in the quarter-final.

They haven’t met since, and will renew their rivalry in a glitzy Vegas showdown being billed as “The Slam: Nadal vs Alacaraz” in a boxing style that will be sure to excite fans of the two Spaniards and serve as the perfect warm-up for the sunshine double of Indian Wells and Miami.

The young Spaniard also became the first teenager to win a Grand Slam title since none other than Nadal himself in 2005 when he lifted the US Open title this year, and the pair have not faced off since Alcaraz became a Major champion and ascended to No 1 in the world.

The exhibition match comes at something of an unusual time part-way through the season, but comes at perfect timing with the main draw of the Indian Wells Masters starting just three days later, giving Nadal and Alcaraz the chance to get some practice in on American soil in advance. The world No 2 has already confirmed that he will not be playing February’s ATP 500 in Acapulco despite being the defending champion.