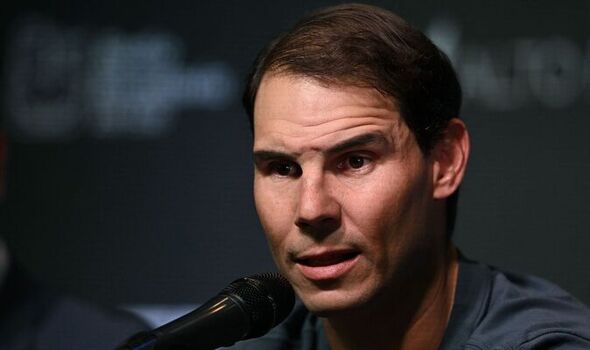 Rafael Nadal has addressed his eventual retirement plans and reassured fans with a firm statement that he wouldn’t be hanging up his racket in the near future. The world No 2 has been set back by multiple injuries this year but remains confident he can keep playing on the tour.

Nadal’s 2022 season came to an end at last week’s ATP Finals as he snapped a four-match losing streak to beat Casper Ruud 7-5 7-5 in his last match of the year. The 36-year-old started the season by winning two Grand Slams to set a new men’s record but it was a tale of two halves as he played just four tournaments after pulling out of Wimbledon with an abdominal tear, going 4-5 in matches.

The world No 2 revealed that he had also torn his ab muscle for a second time ahead of the US Open, while he was plagued by other injuries earlier in the year including a fractured rib and his ongoing left foot issue. Despite all his physical woes, the Spaniard has now made a confident retirement statement as he claimed that he wouldn’t be ending his career in the near future “at all”.

Nadal is currently embarking on an exhibition tour in South America with world No 3 Ruud and both men answered questions on Tuesday after arriving in Argentina, with the 22-time Grand Slam champion discussing his retirement plans. “I am quite a realistic person, the moment will come when it has to,” the Spaniard confessed.

“I am prepared for my next life outside of tennis, I don’t think it will be a problem for me, beyond the process of adapting to all the changes and assimilating things.” While the 36-year-old thought he would adjust to a post-tennis life just fine, he claimed that he couldn’t see himself retiring just yet.

Nadal continued: “I have many important things in my life that make me happy beyond tennis, tennis has only been an important part of my life, but there are others that are equally or more important. I don’t think my end can come in the near future, not at all.”

And one of the most important new parts of Nadal’s life is fatherhood, as he and his wife Mery Perello welcomed their first child last month. The 92-time title winner also spoke about how he was adjusting to life as a parent, explaining: “All changes in life take time to assimilate and adapt, it happened to me six weeks ago when I became a father for the first time. I’m more tired, you sleep a little less, you have a new concern in your life different from everything I’ve experienced up to now.

“I am neither more nor less than any other father, I imagine that everyone will experience it with the utmost emotion and enthusiasm, with great happiness and trying to enjoy the moments that I can spend with him to the fullest.”