Rafael Nadal has sparked concern that he could miss the US Open after pulling out of a warm-up event as he recovers from injury. The Spaniard announced on Friday that he will be withdrawing from the Montreal Open, which he had planned to play before Flushing Meadows later this month.

The 36-year-old has not played since tearing his abdominal muscle before his semi-final clash against Nick Kyrgios at Wimbledon, forcing a disconsolate Nadal to withdraw from contention having beaten Taylor Fritz in an epic five-set match.

Since then, Nadal has been preparing for a return to action after recovering at home following his spell away from the court. The 22-time Grand Slam winner was spotted training at his academy centre in Majorca ahead of his potential return.

But in a statement released on his official Twitter page, Nadal has confirmed that he did not travel to Canada for the Montreal tournament and has decided to withdraw from contention after feeling discomfort when serving. 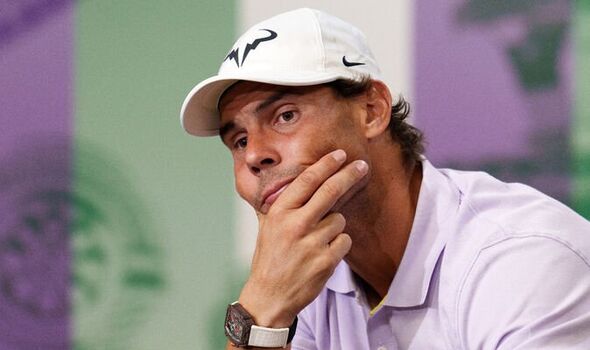 “From the days on holiday and my subsequent return to training, everything has gone well these past weeks,” Nadal tweeted in his native Spanish. “Four days ago, I also started training on my serve and yesterday, after training, I had a little discomfort that was still there today.

“We have decided not to travel to Montreal and continue with the training sessions without forcing ourselves. I sincerely thank the tournament director, Eugene, and his entire team for the understanding and support they have always shown me, and today has been no exception.

“I hope to play again in Montreal, a tournament that I love and that I have won five times in front of an audience that has always welcomed me with great affection. [However,] I have no choice but to be prudent at this point and think about health.”

Montreal’s tournament director Eugene Laperre had made a considerable effort to get Nadal to the event, confirming he had booked a hotel and asked for a case of match balls to practice for Nadal.

Instead, the World No 3 will continue his road to recovery and will be hoping to return in time for the US Open, whcih begins on August 29. And there are genuine concerns that Nadal may now miss the tournament for a third consecutive year after winning the Slam in 2019 in an enthralling battle with Daniil Medvedev.

Having pulled out of the Montreal Open, it remains to be seen whether the four-time US Open champion will be fit enough to play. Nadal has also been included in the entry list for the ATP Masters 1000 Western & Southern Open in Cincinnati, which is likely to be his last chance to get on the court before the US Open commences.