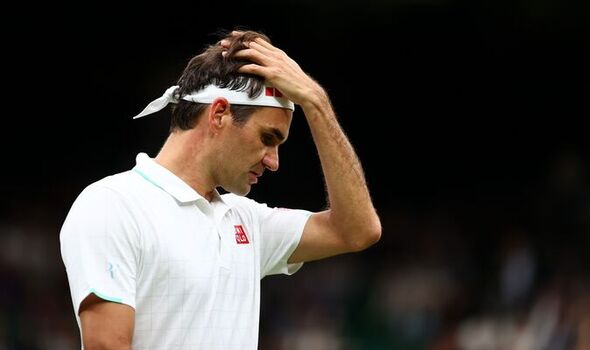 Roger Federer has been warned of the “dangers” of making a return to the tour later this year following his third knee surgery. The 20-time Major winner has been out of action for almost a year and is set to make his comeback at the Laver Cup before playing the Swiss Indoors Basel, but he has been criticised for “making mistakes” in the past ahead of his return.

Federer has played just five tournaments in the last two years, undergoing double knee surgery in 2020 before returning in Doha last year. But a few months later he was sidelined once again following a new “setback” he suffered during the grass court season and underwent a third surgery.

He is now set to return at the Laver Cup in London’s O2 Arena in September before playing his first ATP Tour event at his home tournament in Basel a month later. But former pro-turned-businessman Ion Tiriac has cast doubt over the 40-year-old’s comeback and claimed he should not attempt to compete anymore.

“Federer can’t be competitive at 40. He can play tennis for fun. Which would be a great thing,” he told claytenis. “Though, watch out: it would be a shame if he made a fool of himself. I see it as a danger, because he hasn’t played for so long… And he also makes mistakes.”

JUST IN: Djokovic warned of ‘fatal mistake’ in brutal putdown after Nadal claim

Last year, Federer entered the French Open but withdrew after advancing to the fourth-round after exceeding his expectations at the event and opting to prepare for the grass season after getting three best-of-five set matches under his belt, and the 83-year-old slammed the Swiss star for the decision.

Tiriac continued: “Coming to Roland Garros last year and leaving saying no, that he wants to prepare for Wimbledon. How can he afford to say to a Grand Slam like Roland Garros, that he’s going to drop it for Wimbledon. Go to Wimbledon straight away, and that’s it.”

As for the former world No 1, he is raring to go ahead of his return to competition and previously said he felt like a “racehorse in a box”. Federer also confirmed he wanted to return to full competition in 2023 if his comeback was successful.

“Yes, definitely,” he told Tages-Anzeiger when asked if he wanted to return to the tour next year. “How and where, I don’t know yet. But that would be the idea.”