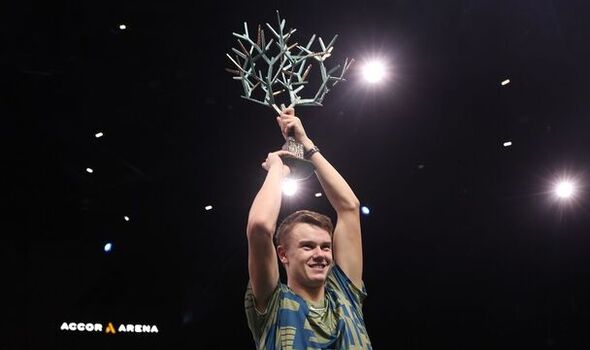 Holger Rune admitted he had “bigger dreams” of future success after stunning Novak Djokovic to win the final of the Paris Masters. After the defending champion took the first set, it was Rune, 19, who produced a superb comeback to eventually prevail 3-6 6-3 7-5 in two hours and 32 minutes and claim his third ATP Tour title.

The Danish star’s victory over the six-time title winner cemented him a place in history, making him the first man to get five top 10 wins in a row during the same single-week tournament. And he showed mettle beyond his years when at 5-5 in the decider, he broke the Serb to set up the biggest service game of his career.

Djokovic then created five break point chances with Rune serving for the title, but each time Rune held his nerve. When the world No 10 finally set up his first championship point 13 minutes into the game, he promptly blew it with a double fault.

But after saving a sixth break point, Rune was finally able to close out the game after more than 17 minutes for undoubtedly the biggest win of his career. And afterwards, he couldn’t conceal his delight when he addressed the media.

When asked in his post-match press conference if he realised the scale of his achievement, Rune replied: “Now I do. After the match not quite. It was very emotional after the match. It’s probably the best feeling of my life, of my whole career. It’s kind of a small dream come true, even though I have bigger dreams.

“It’s a really good step on the way to be able to play these kind of matches against one of the greatest players like Novak. You know, to be able to win that last game was the biggest relief of my life. My stress level was very high, so, you know, super happy to come through.”

Djokovic, 35, endured an injury scare during the match, calling on the trainer during the third se to treat an apparent thigh issue. World no 1 Carlos Alcaraz has already withdrawn from this month’s ATP Finals in Turin after having to pull out of his own match with Rune on Friday.

Despite his win in France, Rune won’t be the replacement though. The Spaniard will be replaced in the field by American player Taylor Fritz.