New York: In-form fifth seed Casper Ruud pushed past Italian Matteo Berrettini 6-1, 6-4, 7-6 (6-4) to reach the US Open semi-final on Tuesday (Wednesday AEST) with a shot at the world No.1 ranking still on the line at Flushing Meadows.

The French Open runner-up beat Berrettini on clay in July’s Gstaad final and looked just as effective on the hard court, hanging back behind the baseline to absorb the 13th seed’s power.

Sprinting through a sublime first set in which he produced just two unforced errors, it looked like Ruud was on track for a blowout victory when he was up 5-1 in the second set.

But Berrettini, who was sidelined a number of times this season due to injury or illness, slowly began to find his usual level and appeared to have cracked the code in the third set when he broke Ruud in the second game and saved four breaks in the third.

Ruud mustered a terrific comeback, breaking Berrettini in the ninth and never trailed in the tiebreak.

“That was (a) better start than I ever had before in a match,” Ruud said in an on-court interview, adding that he had to temper his enthusiasm in order to clinch the affair. 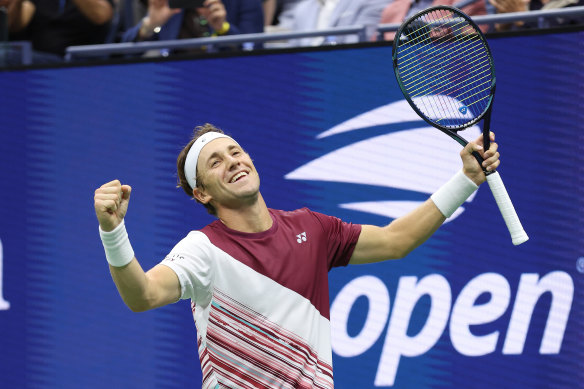 Both Casper Ruud and Carlos Alcaraz can assume the No.1 mantle in New York.Credit:Getty

“Sometimes you can get a little overexcited and think you can walk on water,” he said.

He and third seed Carlos Alcaraz have a chance at seizing the world No.1 ranking at Flushing Meadows, as current holder Daniil Medvedev crashed out in the fourth round in a four-set loss to Nick Kyrgios.

“Of course it’s a little bit (more) motivation,” said Ruud, who next faces the winner of Kyrgios and Karen Khachanov’s quarter-final later on Tuesday. “I’m trying to go for it, of course.”