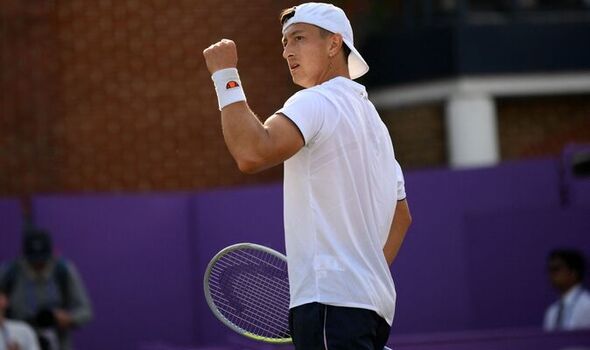 Ryan Peniston fought from a break down in the final set of his match against Francisco Cerundolo to keep his dream debut at Queen’s going by advancing to the quarter-finals in his first-ever ATP Tour event. The Brit raced to a 6-0 lead but suddenly found himself down a break in the final set before winning four games in a row to earn a gritty 6-0 4-6 6-4 victory in two hours.

Peniston is the last Brit left in the singles draw at the cinch Championships following defeats for Cam Norrie, Dan Evans and Jack Draper, as well as the withdrawal of Andy Murray. And he was able to keep on flying the flag for home talent with a gutsy 6-0 4-6 X-X win over Francisco Cerundolo on Thursday.

Peniston made his ATP main draw debut in the opening round, where he upset top seed and recent French Open finalist Casper Ruud 7-6(4) 7-6(2). And the world No 180 more than backed up his stunning tour debut as he raced to a 6-0 lead over world No 46 Francisco Cerundolo in just over 20 minutes in the second round.

The Southend native dropped just seven points throughout the entire set, breaking the Argentine three times to put himself within a set of the quarter-final. He kept his streak going by holding to 15 in the opening game of the second before his opponent finally got on the board for the first time in the match 28 minutes in, holding for 1-1 in the second.

JUST IN: Federer injury comeback under threat as star hit with ‘mistakes’ claim

Things suddenly turned Cerundolo’s way as he went 0-40 up on the Peniston serve, giving him his first three break points of the match, and he broke to love to take the lead in the second. The Brit was unable to convert two break point chances to immediately get himself back on serve as the 23-year-old won his third game in a row to go 3-1 up.

With the momentum firmly with Cerundolo, Peniston was forced to save another break point to keep himself hot on the world No 46’s heels at just one break down. Having saved a break point on his on serve, the Brit immediately earned one of his own in the next game but Cerundolo held to put himself within a game of the set and closed it out 6-4 to force a decider.

The Argentine – who had never played a tour-level match on grass before this week – broke to start the third set and continued to threaten the home favourite as he set up three more break points in Peniston’s next two service games. The match looked to be out of the 26-year-old’s hands when he suddenly broke to level things at 4-4 and held on to go within a game of his second tour victory and he pounced to break Cerundolo and seal a 6-0 4-6 6-4 victory to book his spot in the last-eight, having won the last four games.

Penison will face the winner of the final second-round match between Filip Krajinovic and qualifier Sam Querrey in the quarter-final. It has been a career-defining week for the 26-year-old, who sealed the biggest win of his career when playing his first match on the tour against Ruud on Tuesday. While he was on the court, he was also confirmed as one of the recipients of a main draw wildcard into Wimbledon, where he will make his Grand Slam debut.

Reacting to the announcement that he earned one of the wildcards after beating Ruud, he said: “So I was told that there was a really good chance. It wasn’t a 100% yes but it kind of was. But after I came off and then it was confirmed and it just feels amazing because I have this little list with goals I have and that’s top of my list, to play main draw Wimbledon. To find that out was pretty emotional.”