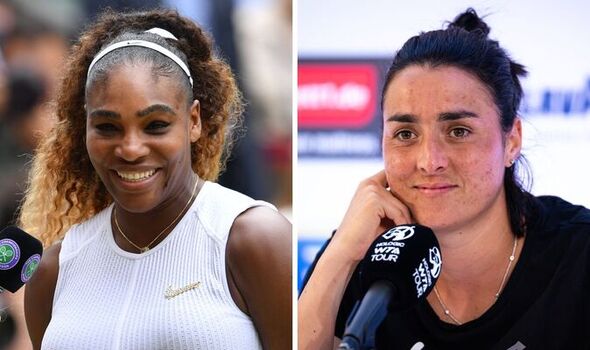 Ons Jabeur has reacted to being called up to play doubles with Serena Williams in the 23-time Grand Slam champion’s comeback. The world No 4 will partner the American in her first tour event in almost a year at next week’s Eastbourne International before Williams returns to Wimbledon a year after playing her last match on Centre Court, where she was forced to retire injured.

Williams announced her long-awaited return to tennis this week, almost 12 months after her last appearance on a tennis court when she was forced to retire just six games into her Wimbledon opening round after slipping on the court and getting injured. Before she makes her return to Grand Slam competition at the All England Club, she will be teaming up with Jabeur in the doubles event in Eastbourne.

It remains to be seen whether the former world No 1 will also request a singles wildcard for next week’s Rothesay Open but her doubles partnership with the in-form Tunisian has officially been confirmed, and the world No 4 has now opened up on being selected as the American’s partner for her comeback, admitting she has “no idea” why the tennis legend wants to play with her.

“I have no idea. I’m pretty lucky that she picked me,” she told Racquet magazine, admitting she would be looking to some other American tennis icons to bring out her best performance for her partner. “I’m going to try to be 100 per cent on the court and serve like Andy Roddick, make volleys like the Bryans, just trying to be really good on court.”

JUST IN: Medvedev reacts to news he can defend US Open as Russia ban ruled out

The 27-year-old said she was first asked to team up with the younger Williams sister before the French Open began last month but didn’t know where they would be playing. When she found out it would be at Eastbourne’s Rothesay International, she was happy to commit to the tournament purely to play with the 23-time Major champion.

Jabeur explained: “I’m still over the moon. I found out before the French Open, and it’s an honour and privilege to play with her. I’m actually nervous, but I’m going to try to be the doubles specialist for the next week and hopefully make zero mistakes.

“But it’s a great honour to play with such a legend, and to be able to really share the court with her is unbelievable because we never played each other and now we’re playing next to each other—we are a team. I’m really excited to be in Eastbourne next week, more and more excited than ever. Hopefully it’s going to be a great tournament for both of us.”

Jabeur has already enjoyed success on the British grass courts, winning her first and only WTA Tour title in Birmingham last year. She also reached her second-ever Grand Slam quarter-final at the All England Club last year, her best showing at a Major tied with her quarters appearance in Australia the year before.