Ashleigh Barty “just continues to surprise” her family, who were bursting with pride after watching her brilliant victory over Karolina Pliskova at Wimbledon in the early hours of Sunday morning (AEST).

Like most observers, the Barty family watched her progression through Wimbledon with trepidation after the hip injury that flared at Roland-Garros drastically disrupted her grasscourt preparations.

“We were just happy to see her win that first round, because that’s always the hard one for her, and then get into the tournament,” her father Rob told The Age and the Herald.

“We thought if she could get two or three wins that would be great because she didn’t do any practice on the grass, she didn’t have any lead-in tournaments, you know, she just continues to surprise us.”

Barty has been absent from her family, the pillars of her life, during 2021 after she made the decision to pack her bags and rejoin the tour. Last year was spent at home in Queensland once the pandemic struck.

Face-to-face celebrations with mum and dad will have to wait.

“She won’t get back until probably November, so it will be a full 10 months that she’ll be away,” Rob Barty said.

“But she speaks to her sisters and my wife every single day, on Facetime or whatever it is, and talks to her nieces and nephews.

“So she’s in constant touch with us. But, yeah, it’s great and we’re so happy for her and the team.”

A junior champion on the London grasscourts 10 years ago, Barty only recently took the big step forward to publicly articulate her dream to win Wimbledon out loud.

Barty, now a two-time major winner, explained in an interview with Paralympic legend Kurt Fearnley last year how doing that was important for her. She got to that realisation after continual work with her mind coach Ben Crowe who, in essence, convinced the star player that it was OK to dare to dream. 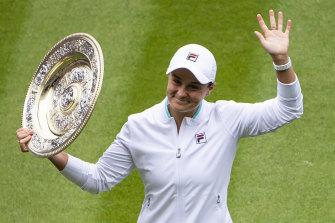 According to Barty’s father, the Barty-Crowe connection has been integral to the world No.1 adding a Wimbledon trophy to her Roland-Garros success from two years ago.

“You know she used to speak to her first coach Jim Joyce about things like this [winning Wimbledon], but then she went through a period where she didn’t want to tell people what she was thinking or what she was aiming for,” Rob said.

“And the difference he’s made to her life and her tennis is just incredible.”

Even during the on-court interview after the 6-3, 6-7 (4-7), 6-3 victory over Pliskova, a gritty win where Barty got on top early in the deciding set after the Czech’s revival, Barty spoke about vocalising her long-held dream.

‘I think she’s teaching the rest of the world how to be a great human being first, and a great athlete second’

Later, she said there was “certainly disbelief” that her dream had been achieved.

“To be able to be successful here at Wimbledon, to achieve my biggest dream, has been absolutely incredible,” Barty said.

“The stars aligned for me over the past fortnight. [It’s] incredible that it happened to fall on the 50th anniversary of Evonne’s [Goolagong Cawley] first title here, too, is absolutely incredible.”

Crowe, a close friend of Barty and a mentor, explained how his client’s ability to genuinely find perspective allowed her to freely set goals without the fear of what happens if they’re not met.

“She still wants to win, absolutely, but she just has a beautiful perspective that doesn’t put additional external pressure or expectation on herself,” Crowe said.

“And it doesn’t mean she’ll win. It just means she’ll bring the best version of her to the dance floor to enable that opportunity to take place, and then whatever happens happens.

Barty’s on-court demeanour, reacting to an errant net cord – as happened more than once against Pliskova – was met with smile instead of scorn and showed her perspective, Crowe said.

“I think she’s teaching the rest of the world how to be a great human being first, and a great athlete second,” he said.

“You can tell by the smile that she has in certain moments when things don’t go her way [that the process is working] and obviously that smile when she experiences success as well.

“[She can] remind herself that playing tennis is what she does, but it’s not who she is, it doesn’t define the depth of her.

Every match of the Wimbledon finals is available to stream live and ad-free on Stan Sport with select games on 9GEM.

Tags: continues, just, she, surpris, to
You may also like
Latest Posts