Krejcikova and Ram won the final 6-1, 6-4 to claim their second Australian Open together after winning in 2019. 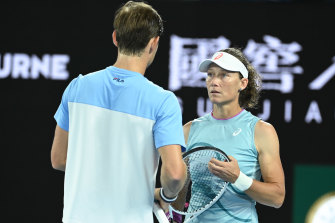 After the match, Ram paid tribute to Krejcikova, who had won the mixed doubles with Nikola Mektic in 2020, making this year’s title her third straight title at Melbourne Park.

Stosur thanked Ebden and also Tennis Australia chief executive Craig Tiley for giving the pair a wildcard into the event. Stosur said they hoped to play together again in the future.

Ebden described Krejcikova and Ram as “pretty flawless” and congratulated them on the title.

Ram dominated the opening set with his powerful serve and deft groundstrokes as the sixth seeds took a 4-0 before eventually claiming the set 6-1. 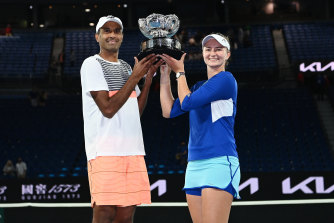 It looked like the Aussies could be quickly put away in the second set, but they regained their footing as Stosur lifted shots around the court and Ebden began to hit winners at the net.

The Aussies were on terms at 4-4 in the final set but were unable to prevent a break after Ram held serve in the penultimate game.

The sixth seeds have a special understanding on the doubles court and they proved this yet again in this year’s Open.

Tags: ‘flaw, and, Ebden, fall, Stosur, to
You may also like
Latest Posts