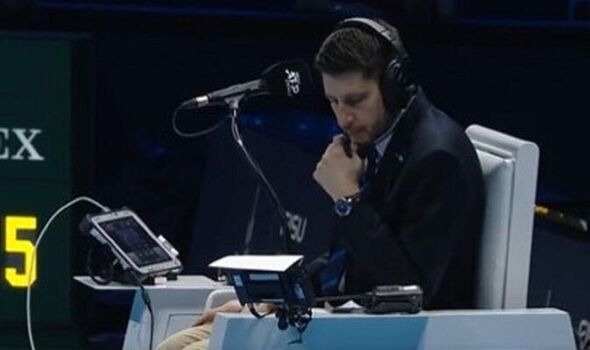 Tennis took a leaf out of the World Cup’s book as VAR was called in during the second set of the men’s doubles final at the ATP Finals just moments after it was used to overturn Ecuador’s goal in the opening game of the World Cup against Qatar. World No 2s Joe Salisbury and Rajeev Ram were leading by a set-and-a-break when they believed opponent Nikola Mektic hit the ball twice during a rally, prompting the umpire to use the video review system to overturn the call and give the second seeds the point.

Britain’s Joe Salisbury is contesting the final doubles match of the 2022 ATP Tour season with long-time partner Rajeev Ram as the Brit-American duo take on Croats Nikola Mektic and Mate Pavic in the final of the ATP Finals. The second seeds were leading by a set-and-a-break when they called on the umpire to use video review after disagreeing with a call.

During a rally at 7-6(4) 2-0, Mektic appeared to double-hit a ball that he successfully returned before Salisbury dumped his return into the net. And all four men were immediately looking up at chair umpire Renaud Lichtenstein for clarification, with the world No 2 pair adamant that their opponent had hit the ball twice.

The French umpire used the video review system for the first time at this week’s season-ending tournament, as it had been requested earlier in the week for a net issue but denied with the technology not used for those calls. Lichtenstein had believed that the 33-year-old’s double hit came in one motion, rendering it valid.

But upon inspection, the official overturned his call and gave three-time Grand Slam champions the point instead. “Ladies and gentlemen, the call is overturned,” Lichtenstein informed the crowd at the Pala Alpitour after reviewing the footage.

“Mr Mektic touched the ball twice, therefore the point goes to Ram and Salisbury,” he added. The British-American pair then earned a break point on a decisive, sudden-death deuce but Mektic and Pavic managed to hold on and stop themselves from going down a double break.

But the Croatian duo failed to break back and it was Ram and Salisbury who closed out a 7-6(4) 6-4 victory for their maiden title at the ATP Finals. The pair also pick up the biggest winners’ cheque in men’s doubles history after going undefeated in their group stage matches, pocketing £782,521 ($930,300).

The pair had reached the final last year but missed out on the trophy as they lost to Pierre-Hugues Herbert and Nicolas Mahut. But they redeemed themselves this year, with Salisbury also becoming the first Brit ever to lift the men’s doubles title at the year-end Finals.