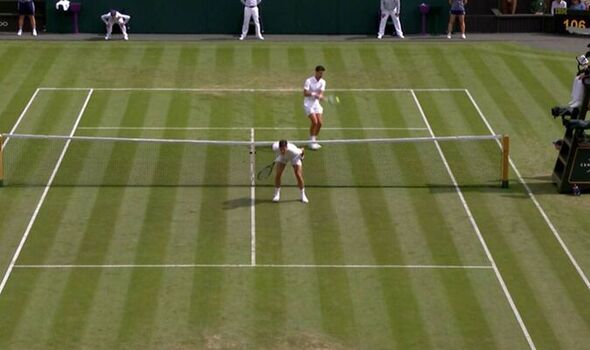 Thanasi Kokkinakis may not have troubled Novak Djokovic too much on his Centre Court debut, but the Aussie tennis ace left his mark another way after making the crowd laugh towards the end. Kokkinakis was always going to be up against it in his match against Djokovic, who hasn’t lost at Wimbledon since 2016.

That proved to be the case with Djokovic quickly winning the first two sets and then going a double break up in the third. While Djokovic was serving for the match at 5-2 with the game tied 30-30, Kokkinakis then did something potentially never seen on Centre Court.

Djokovic smashed a fierce forehand down the line and sensed a return would be bouncing near the net and was already there for a delicate drop shot. Kokkinakis then scrambled to get a racket on it and sent it over directly at his opponent.

Sensing the point was already over at the point, Kokkinakis hilariously span round and bent over to seemingly tease Djokovic into hitting the ball at him. The No 1 seed rejected the open invitation, choosing to delicately lob the Australian. 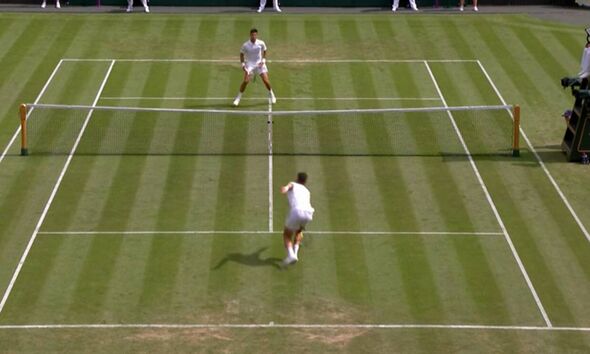 The 35-year-old was unable to make the first one count as Kokkinakis then hit a stunning winner down the line. The laughter continued after that point on Centre Court when one member of the crowd shouted out: “Make him work for it”.

Kokkinakis smiled and shrugged his shoulders in response as if to say what more can he do. A double fault from Djokovic then handed Kokkinakis his first break point of the match, but the pre-tournament favourite resettled himself to eventually win and move on.

Djokovic was certainly pleased with his performance in the match, even hinting that he has more to offer.

“I’m very happy with my performance today. I started very well, solid from the back of the court,” Djokovic said. “Made him work for every point and worked him around the court.

“It was not easy to serve because of the wind but I think from my side, high quality performance and I am very pleased.

“I am pleased with the way I’ve raised the level of tennis in the past two days. Obviously just thinking about the next challenge and hope things will get better as the tournament goes on.”