One year after Nick Kyrgios debuted a creative tennis-inspired coiffure for the Laver Cup, a mid-match haircut from the crowd has drawn eyes away from the on-court action at the quarter-finals of the US Open.

While Kyrgios played against Karen Khachanov for a place in the semi-finals, one spectator couldn’t wait for his barber’s appointment. 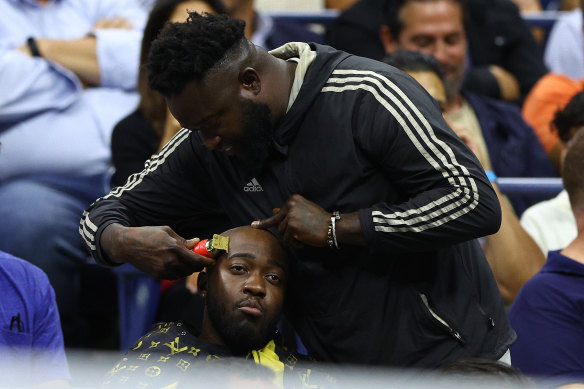 YouTuber DiJion got a haircut during the quarter-finals of the US Open.Credit:Getty

In several videos that appeared online on Wednesday, American YouTuber JiDion was shown sitting in the second row of the crowd at the quarter-final match, getting his hair shaved off in the middle of the second set.

“We’ve got a guy getting a haircut a couple of seats away from me,” one commentator said.

The man accompanying JiDion was equipped with an electric clipper.

American great John McEnroe added that it “seem[ed] like a weird time to do that”.

Another commentator joked that they “had no idea that [haircut] service was provided here”.

It’s not the first time that the content creator has decided to get a haircut in an unconventional setting. YouTube videos show JiDion getting his hair cut during a college lecture in October last year and at an NBA game six months ago.

In September 2021, Kyrgios surprised audiences with a special haircut featuring a tennis ball design on the back of his head, complete with a creative moving effect.

DiJion, still wearing his Louis Vuitton cape, was escorted out of Arthur Ashe stadium for disruption to play.