Despite a year of upheaval that included the end of a fruitful coaching partnership with Darren Cahill, and a frustrating injury that forced her to miss two majors, Simona Halep is optimistic Australia will continue to be a happy hunting ground.

The two-time major winner is now 30, recently married, and content to move on to a new coaching team after her long partnership with the renowned Australian coach ended in September.

An Australian Open finalist four years ago and semi-finalist in 2020, Halep has a strong record at Melbourne Park and she would dearly love to add the Daphne Akhurst Memorial Cup to her 2018 Roland Garros and 2019 Wimbledon titles.

In November, her season having just finished, Halep, in an expansive social media post, explained how various difficulties in 2021, including a calf injury that forced her out of Rome, had affected her.

On the ground in Melbourne this week, ahead of a lead-up women’s tour event, Halep reflected on the sometimes trying times.

“I have been exhausted, mentally, because of [being in] the bubbles also, and because of the eight years I’ve been at the top,” Halep told The Age and Sydney Morning Herald.

“Every week I had to perform at my highest level, it was not easy.

“Pressure, tensions, emotions – all these things got me down a little bit.”

The injury, a severe calf tear, happened on the clay in Rome in May and needed a lengthy period of rest and recuperation.

“I started to struggle with confidence and to question whether I could come back to where I was, if I could trust my body to hold up.”

“Those three months I’ve been home I rested a lot. I enjoyed life. [It was] different. I recharged my batteries to be able to play another year,” Halep said.

The social media post came in the aftermath of her parting ways with Cahill, a former coach of Andre Agassi and Lleyton Hewitt.

“2021, you have been hmmmm, tough to describe,” Halep said on Twitter.

“To be honest it has been an incredibly challenging year.

“I was emotionally exhausted for a long period of time and then I started to suffer some little injuries until the big one came, the calf injury in Rome. 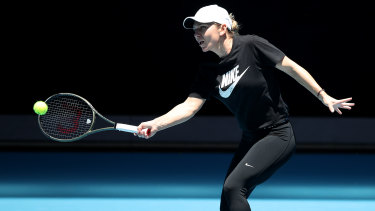 Simona Halep is optimistic Australia will continue to be a happy hunting ground for her.Credit:Getty Images

“I didn’t know how to manage that because I had never faced something like that before.

“My desire to play was huge, but I couldn’t play for a few months and had to miss my beloved Roland Garros and was unable to defend my title at Wimbledon.

“I started to struggle with confidence and to question whether I could come back to where I was, if I could trust my body to hold up.”

Halep is now coached by Adrian Marcu. “I’ve known him since I was 10. We know each other for a long time,” said the Romanian former world No.1.

“After I stopped with Darren I thought he’s the perfect match for my team.

“And also Daniel Dobre [who is also part of the coaching team] …. these two guys, I think, are the perfect team for me in this moment.”

While the year had its share of adversity, Halep also got married, a moment that left her overjoyed.

“I’m happy that I found the right man, and now I’m happy, so it’s good. Life is good,” she said, smiling.

Halep has reached at least the quarter-finals in Melbourne five times since 2014, and a large chunk of that time included the Cahill partnership.

They remain strong friends and have already caught up since Halep arrived in Melbourne.

“It’s been a great relationship, and he’s still my friend and we are friends,” she said.

“With him I won the grand slam (event) that I really wanted, and I jumped to the next level with
his help, so always I will be very thankful to him.

“The decision [to move on] was from both sides, and there was probably too much time together as coach and player, and sometimes you have to break that. But we are in a good connection still, and I’m really thankful that he’s been in my career.”

The women’s title contenders in Melbourne will be plentiful, but world No.20 Halep could pose a threat.

“This is the dream. I don’t know if I’m ready to do that or not this year,” Halep said.

“Everything I want is to give my best chance to win every match I play, and that we enjoy the time, because here [in Australia] it’s always the pleasure to play in front of the people.

“I feel good every time I come here, that’s why I’ve played well in the past.”