Bernard Tomic is one win away from a return to the Australian Open after missing the 2020 tournament. 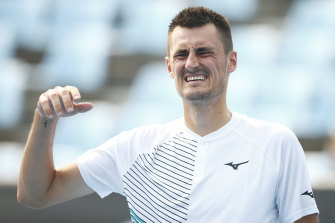 Bernard Tomic is one win away from the Australian Open main draw.Credit:Getty Images

Tomic told tennis.com.au that he thought he was "done" when Schoolkate broke in the ninth game of the third set and had match point at 40-30. But Tomic broke back and went on to win.

Tomic, currently world No.228 but who has been ranked as high as world No.17, showed his big-match experience in the third-set tiebreaker.

"The third [set] was high-level tennis from both of us," Tomic said. "I should have lost that third set … today was lucky."

Tomic will next face another fellow Australian, John-Patrick Smith, who is attempting to qualify for the Open for the first time.

The 31-year-old has made it to this point in qualifying twice, but fell at the final hurdle both times.

"It'd be huge, I'm telling you," Smith told tennis.com.au of what qualifying would mean to him. "It would be the best feeling."

Teenager Dane Sweeny is the only other Australian man left in the qualifying draw, getting through to the third round in a walkover after American Denis Kudla, his intended opponent, tested positive for COVID-19 and was withdrawn from the tournament.

The 19-year-old told tennis.com.au he would be "over the moon" to qualify for the grand slam.

He must beat Ukrainian Sergiy Stakhovsky to get there. Stakhovsky beat another Australian, Jason Kubler, 7-6 (7-4), 6-4, to advance to the third round.

In women's qualifying, Australians Ellen Perez and Olivia Gadecki both lost in the second round.

Tags: lucky, one, today?, Tomic, w, was
You may also like
Latest Posts