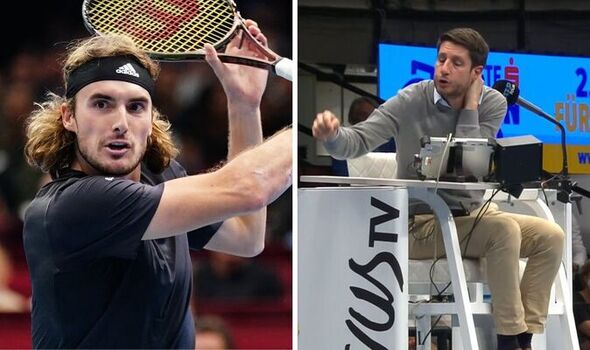 Stefanos Tsitsipas’ dad found himself warned for a second-consecutive match when the umpire warned Apostolos to stop extensively talking to his son during his match against Borna Coric on Thursday night. It comes after Tsitsipas himself grew frustrated with his father and coach during his first-round clash with Dennis Novak, asking him to leave and calling him a “malaka”, which can translate to ‘w****r’.

Tsitsipas suffered his second defeat to Coric in just over two months as the Croat defeated him in a final set tiebreak in the second round of the Vienna Open. It was a lengthy battle as the world No 27 needed two hours and 43 minutes to dispatch the Greek 4-6 6-4 7-6(4), though trouble began early on in the match when the world No 5 was warned over his dad’s coaching.

While coaching from the box has been introduced as a trial on the ATP Tour, Renaud Lichtenstein called Tsitsipas over during the seventh game of the match to explain that his dad had been speaking extensively, asking him to stop the lengthy chat. It was the second match in a row that Apostolos faced criticism, with Tsitsipas himself swearing at his father during his first-round match.

The 24-year-old grew frustrated with his dad after going a break down to the world No 155 on Wednesday, shouting: “You’re a malaka, you’re a malaka,” before ordering him to leave his player box. But Tsitsipas was able to turn things around as he broke back and sealed a 7-6(2) 6-2 victory.

Things didn’t go as well for the Greek on Thursday, as he lost his one-set lead over Coric and was ultimately defeated in three sets. It was the Croat’s third victory over the world No 5 in four meetings, having won their last three encounters including the Cincinnati Masters final in August.

Tsitsipas’ mother Julia was also spotted telling Apostolos to be quiet after the 24-year-old’s coach and father stood up clapping. It’s not the first time Tsitsipas has grown frustrated with his dad, as he famously smashed a racket in his direction during the 2020 ATP Cup, prompting his mum to tell him off.

But both Tsitsipas and Apostolos have made it no secret that they are happy with the new coaching rule, with the nine-time title winner all but admitting that his dad used to coach him from the stands when it was banned. “Thank God coaching is now allowed in tennis. I feel that people didn’t understand anything,” Apostolos recently told Tennisology.

Meanwhile, the world No 5 told L’Equipe: “It hasn’t changed anything for me. It’s always existed for absolutely all players. They should have allowed it thousands of years ago. It allows coaches to do their job, they are there for that. No more fines, at least. It was getting difficult.”