World No.4 Stefanos Tsitsipas has cast further doubt on his Australian Open campaign as he continues to recover from elbow surgery.

The Greek star missed his opening match at the ATP Cup at the weekend and lost in three gripping sets to Argentine Diego Schwartzman in Sydney on Monday night.

Tsitsipas did, however, play doubles for Greece against Poland on Saturday.

A finalist at Roland Garros, Tsitsipas is hoping for some pain relief when he takes to the practice court.

“I don’t know what my future plans are for this tournament. I’m not really sure. I’d love to play, but I really don’t know how I’m going to feel tomorrow,” Tsitsipas said.

“That was one of the biggest concerns if I’m going to play this match today, how is the recovery going to be tomorrow, which was the issue with the doubles. 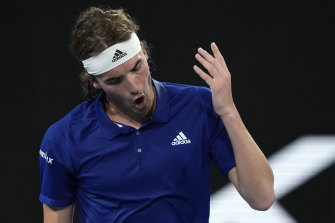 Stefanos Tsitsipas is no certainty to play the Australian Open.Credit:AP

“I finished the doubles, next day I couldn’t serve. I was unable. I was in a lot of pain.

“So I’m really hoping to be able to walk on court tomorrow and practise some serves without pain. That’s my biggest goal right now, to have 100 per cent recovery on my elbow.

“I have done lots of things in the last couple of weeks to try and protect it as much as I can and get it to 100 per cent again.

“So [I’m going to] focus on my health and wellbeing more than any other thing right now.”

With 13 days until the Australian Open begins, Tsitsipas was, however, optimistic that he had time on his side.

“I think if I take the right precautions and follow what my doctor says, then I can see myself performing at 100 per cent at the Australian Open,” he said.

“Going into that surgery, even the doctor was unsure if it’s a good idea to perform and play the Australian Open. My recovery was much better than he would have expected in comparison with some other players that he has treated in the past.”

Nadal had been in doubt for a trip to Australia after contracting COVID-19 following an exhibition event in the UAE last month, where several other players also tested positive. 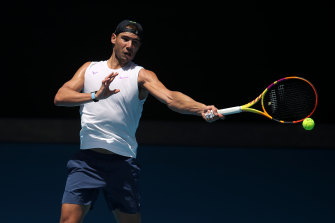 Rafael Nadal will play doubles as part of his Open preparation.Credit:Getty Images

But he arrived in Melbourne last Friday, allaying any fears that the first major of 2022 could be missing all members of the “big three” – Roger Federer, Novak Djokovic and Nadal.

Nadal will team with countryman Jaume Munar in a doubles clash against Australians Marc Polmans and Alexei Popyrin as part of an ATP 250 tournament.

Japanese star and defending Australian Open champion Naomi Osaka and Australia’s Nick Kyrgios are two other leading lights who will play in Melbourne on Tuesday.

In a notable result at the Adelaide International on Monday, two-time Wimbledon champion Petra Kvitova was sent packing by Australia’s world No.263 Priscilla Hon.

Australia’s world No.45 Ajla Tomljanovic also won her opening match leaving three Australians – Hon, Tomljanovic and Ashleigh Barty – in the top half of the draw.