Play was suspended during the fourth set of the French Open quarter-final between Novak Djokovic and Matteo Berrettini to impose a pandemic-related curfew set at 11pm (7am Thursday AEST).

Fans were expected to leave at 10.45 pm but many did not and even started chanting “we’ve paid, we’ll stay.” Some even jeered those who left. 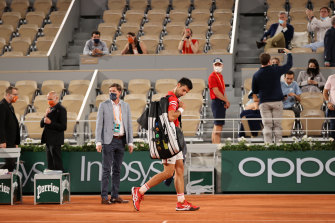 World No.1 Novak Djokovic leaves the court after play was suspended during the fourth set of his French Open quarter-final.Credit:Getty

Nadal had beaten Schwartzman twice before at Roland Garros, but he seemed to have met his match as the Argentine played with confidence, dominating the longer rallies and for a brief moment it seemed he had exposed a chink in the Spaniard’s armour.

Dominic Thiem was the last player to take a set off Nadal in the 2019 final but Schwartzman ended the his run of 36 consecutive sets at Roland Garros.

“Losing sets is something I accepted during my tennis career. The thing that matters is how you recover from a set lost,” Nadal, who is chasing a record-extending 21st grand slam title, said. 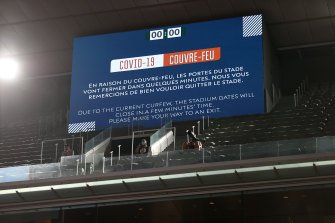 An announcement made to fans at Roland Garros.Credit:Getty

Nadal wrapped up the final set in 26 minutes to move into his 14th Roland Garros semi-final.

In the women’s draw, there will be four first-time semi-finalists for just the second time in the professional era. It also happened at the 1978 Australian Open.

Sakkari is still two wins away from lifting the trophy, but Wednesday’s victory means she’s already in new territory — just like the other three women left in the draw. 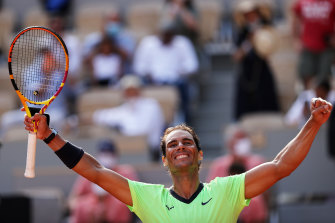 Sakkari ended Swiatek’s 11-match and 22-set winning streaks at Roland Garros by beating her 6-4, 6-4 Wednesday to guarantee that there will be a first-time grand slam champion when the tournament ends.

“We are four very good players,” Sakkari said. “Players that can win a title, for sure.”