Maria Sharapova was plucked from Russian obscurity at the age of 6 after the great Martina Navratilova spotted her at a Moscow tennis clinic and recommended that her family move to the United States so she could receive proper training. 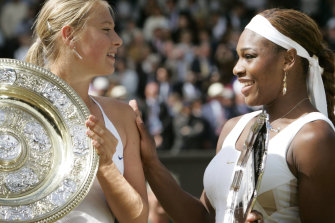 Sharapova beat Williams at Wimbledon in 2004 but her success against the great American wasn’t to last.Credit:Reuters

She won her first Wimbledon matches – three of them – as a 16-year-old wild-card entry in 2003 and then won the whole tournament one year later, announcing herself to the world as the third-youngest woman to win at the All England club.

Instant, immense fame, a No.1 ranking and two more Grand Slam titles would follow, all before she turned 21. Sharapova eventually would win the career grand slam – becoming the 10th and most recent women's player to accomplish it – with titles at the 2012 and 2014 French Opens, even though she had once said she felt like a "cow on ice" while playing on clay.

Maria Sharapova also made only one more grand slam final after winning at Roland Garros in 2014.

In 2016, she received a two-year ban after a positive test for meldonium, a substance that had been banned less than a month earlier and one she had taken for years (her suspension later was reduced to 15 months by an arbitration panel, which found she was not an "intentional doper").

Sharapova, somewhat infamously, also struggled against Serena Williams as the American maintained her spot atop tennis's hierarchy: After winning two of the first three matches they played, Sharapova would lose the next 19. Their most recent meeting, in the first round of the 2019 US Open, lasted only 58 minutes.

So that is what's under consideration upon the news on  Wednesday that Sharapova is retiring, effective immediately, at the age of 32. Immediate and somewhat prolonged success, yet only five grand slam titles (tying her for 22nd all-time with eight other women). A combined 21 weeks at No. 1, yet none since 2012. The taint of a failed drug test, however unintentional. A rivalry with Williams for the women's tennis spotlight that was a rivalry only on the most superficial of terms.

"Looking back now, I realise that tennis has been my mountain," Sharapova wrote in an essay announcing her retirement in Vanity Fair. "My path has been filled with valleys and detours, but the views from its peak were incredible. After 28 years and five Grand Slam titles, though, I'm ready to scale another mountain – to compete on a different type of terrain."

Beset by injuries even during her most productive years, Sharapova was able to play only 15 matches last season because of shoulder trouble, going 8-7. Her final match, a 6-3, 6-4 loss to Donna Vekic at the Australian Open last month, dropped her world ranking outside of No. 350, and she was ranked No. 373 as of Wednesday.

Since her return from the doping suspension, Sharapova won just one title and advanced to the quarter-finals of a grand slam tournament only once, at the 2018 French Open, and only then because Williams withdrew due to injury ahead of their fourth-round match.

Sharapova also was a potent promotional force, scoring endorsement deals with Nike, Canon, UBS, Porsche and Tiffany, among others, over her career. And the deals didn't stop when the wins dried up: Last year, she ranked No. 2 on Forbes's list of the world's richest female athletes (behind Williams, of course). But Sharapova, in announcing her retirement, seemed to suggest that her battles on the court were what mattered.

"Throughout my career, Is it worth it? was never even a question – in the end, it always was," she wrote. "My mental fortitude has always been my strongest weapon. Even if my opponent was physically stronger, more confident – even just plain better – I could, and did, persevere."

Tags: a, c, leaves, Maria, Sharapova, Why
You may also like
Latest Posts