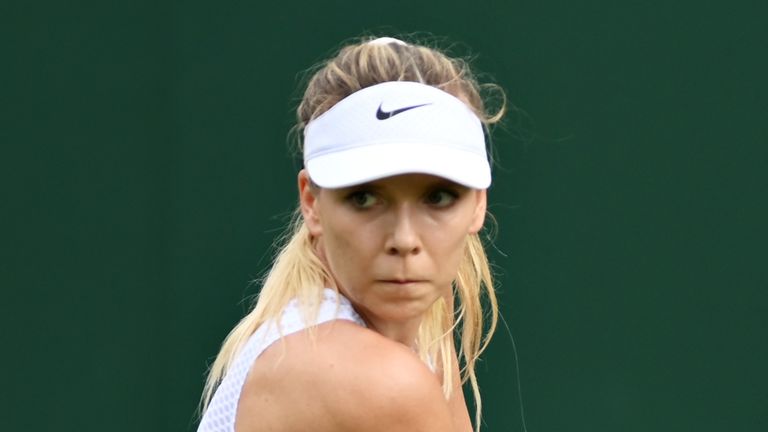 Britain’s Katie Boulter has set up a second-round showdown with second-seed ​Aryna Sabalenka at Wimbledon.

The 24-year-old missed the Championships in 2019 with a back problem which saw her drop out of the top 100 in the world, after a breakthrough season in 2018.

But Boulter, now ranked 219, showed her mettle on Court No 17 as she rallied from a set down after American qualifier Danielle Lao took the opening set.

Making her Wimbledon debut at the age of 30, Lao looked to be on course for a date with Sabalenka, who was the first winner of this year’s Championships when she needed just an hour and 16 minutes to beat Romanian Monica Niculescu.

Sabalenka will now prove a tough nut to crack for Boulter, the big-hitting Belarusian has yet to win a major Grand Slam single title despite a pair of major crowns in the doubles events, but she fired a remarkable 48 winners during her straight-sets success.

“I’ve played her once before in the Australian Open a couple years ago, that was second round as well,” Boulter said.

“I lost in two sets. I think it was like one break of serve in each one. I actually thought it was a really good match. Two other British women were in action when play eventually got under way on day one, as Jodie Burrage and Katie Swan both exited the draw.

On Court 5, 22-year-old Burrage had a tough time of it in her first main-draw match. She spent just 55 minutes on court against American Lauren Davis and won just three games in a 6-2 6-1 loss.

Burrage’s 24 unforced errors contributed significantly to her loss, while Davis converted every one of the break points that she created and made just three unforced errors of her own. 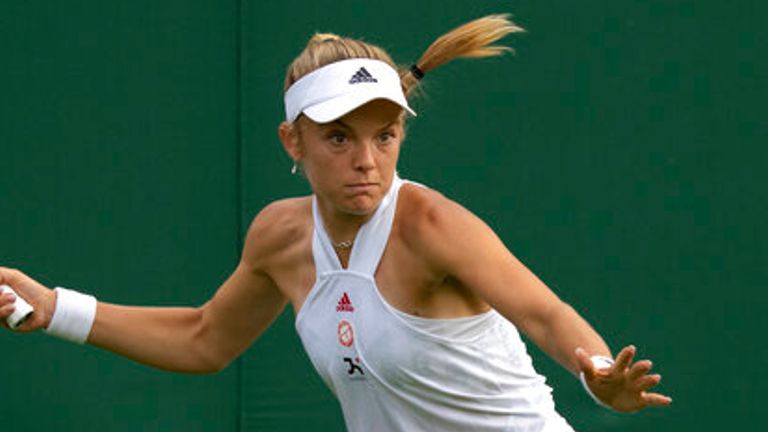 Swan, who was the first British woman to qualify for the Championships in 20 years, fell at the hands of the 23rd-seed Madison Keys.

Keys’ experience and power ensured she was able to dictate the match and she won 85 per cent of points on her first serve. The American, who reached the quarter-finals in 2015, will now face her compatriot Davis in the second round.

Through in 49 minutes 💨@GarbiMuguruza eases through to the second round with a 6-0, 6-1 victory against Fiona Ferro#Wimbledon pic.twitter.com/hY7zOo2EpS

A trio of title contenders also moved through to the second round, led by 2017 champion Garbine Muguruza. The 11th seed and the 2017 champion spent just 50 minutes on court against Fiona Ferro. She won 53 of the 73 points played as Ferro made 22 unforced errors.

Muguruza will now meet qualifier Lesley Pattinama Kerkhove, who overcame Svetlana Kuznetsova 6-3 6-3 in the first round.

Joining Muguruza in the second round are a pair of Grand Slam champions from 2020. Poland’s Iga Swiatek was the champion in Paris in October last year and she eased past awkward veteran Su-Wei Hsieh in straight sets, while Australian Open champion and fourth seed Sofia Kenin, who needed just 63 minutes to beat Xinyu Wang. However, two-time Wimbledon champion Petra Kvitova crashed out in arguably the tie of either the men’s or women’s first round against Sloane Stephens.

American Stephens, a former quarter-finalist at the Championships, was thrilled with her 6-3 6-4 victory over the 10th seed.

“When I saw the draw, I thought that it was going to be a difficult task,” she said. “But I thought that I might be on a big court and I was feeling good – it meant that I was excited to play against her.

“I’m really excited to be back here competing. I love grass, it’s just not really translated [recently] and it’s been a couple of years since I’ve had a good result on grass.

“It’s a good start so I’m looking forward to more matches and hopefully I can get a good run here.”