Wimbledon 2022 is almost upon us, with the famous grass-court Grand Slam returning on Monday. And the players will learn their first-round opponents today with the likes of Rafael Nadal, Novak Djokovic, Andy Murray, Emma Raducanu and Serena Williams among the many keen to learn their fate.

The tournament have banned Russian and Belarusian players due to Russia’s invasion of Ukraine and so the likes of Daniil Medvedev, Andrey Rublev, Aryna Sabalenka and Victoria Azarenka are all absent. While Roger Federer, Dominic Thiem, Alexander Zverev, Naomi Osaka, Leylah Fernandez and Venus Williams are absentees due to injury. But there are still a whole host of star names in the men’s and women’s draws today, and we could be treated to some thrilling early-round ties.

Murray, Nick Kyrgios, Stan Wawrinka and Serena are among those who aren’t seeded. That could throw up some all-star match-ups in the first week at SW19. Djokovic, the winner of the last three Wimbledons, and Nadal the Australian Open and French Open winner this year are the stand-out favourites to win the men’s title, though Carlos Alcaraz could be a threat.

In the women’s draw Iga Swiatek, the world No 1 and French Open champion, is the woman to beat. She’s only ever got to the fourth round of Wimbledon but the Pole, still just 21, is on a blistering run of form of over 35 matches unbeaten. Reigning champion Ashleigh Barty retired earlier this year while Serena Williams still searches for a record-equalling 24th Grand Slam triumph but has not played a singles match since last year’s Major.

It is also meanwhile hoped two-time champion Murray, British No 1 Cameron Norrie and Dan Evans can enjoy some extended runs, while US Open winner Emma Raducanu will hope to delight Centre Court again as she did last year, though injury may dictate her chances of the teenager winning another Slam so early in her career. 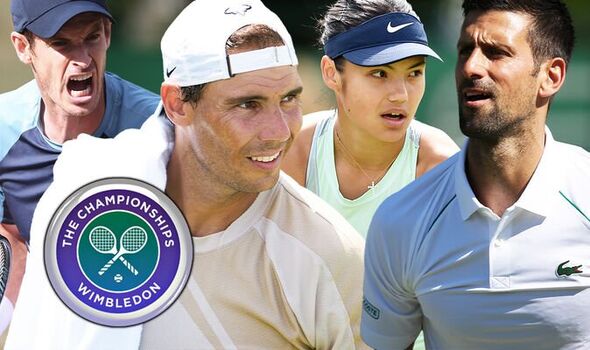 There will be plenty of home favourites to cheer on at Wimbledon this year, with a large number of British stars poised to take part in the first round of the main draw.

A total of 17 singles players hailing from the UK will be involved, the most since 2001 when there were also nine men and eight women.

Cameron Norrie and Dan Evans have been named the list of men’s seeds at No 9 and No 29 respectively, while Emma Raducanu is the only female British player to have been seeded at No 10.

This year’s tournament will begin on Monday without the likes of Daniil Medvedev and Victoria Azarenka due to the ban on Russian and Belarusian players from competing amid the ongoing military situation in Ukraine.

The ATP and WTA recently announced that no points will be awarded at the All England Club as a result of the ruling, which has drawn sharp criticism from a number of prominent figures within the sport.

A handful of players have already suggested that a boycott could be on the cards due to the lack of ranking points on offer, which are required to determine a competitor’s ability to enter tournaments and receive seedings.

The vast majority of tennis’ big names will be in the hat, though, in spite of the widespread condemnation of the ban on players from certain nations.

Hello and welcome to Express Sport’s live coverage of this year’s Wimbledon draw.

The men’s and ladies’ singles and doubles main draws will both be conducted from 10am and the likes of Rafael Nadal, Novak Djokovic, Emma Raducanu and Serena Williams will all be watching closely.

Djokovic will be looking to defend his men’s title at the All England Club over the next couple of weeks, but there will be a new champion in the women’s ranks following Ashleigh Barty’s retirement earlier this year.

We’re just 45 minutes away from the start of the draw and will be on hand to keep you updated with all the latest news from SW19 over the course of this morning.